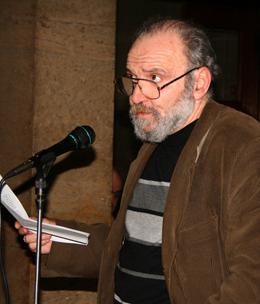 I determine my own status as a Bulgarian of Jewish origin (Bulgarian Jew), without paying particular attention to this identity of mine, unless when external factors require otherwise.

In the first place, I put my professional and family identity, and then it come the national, sexual, social, religious, etc. Of course, when I was younger my sexual identity was taking more prominence. Now I am more sensitive to my national identity and sometimes it takes the first place, which I believe is a result of the increasing manifestations of anti-Semitism lately.

I realize that my family upbringing, the environment in which I lived, and people with whom I have socialized have largely shaped my identity. However, there are genetic factors out, and coincidences that have influenced this formation as well.

The most obsessing image is that of the reader (respectively, of the writer) and of the man in a hurry, the man who is behind time. Library as without beginning and an endless labyrinth, and the book (especially the valuable, old, and rare book) as a discovery and adventure, are also among the images that identify me. I see no particular connection (at least not intentional) between the music I prefer, and my identity. Rather, the books I read, and art, which I prefer are the ones that have connection therewith.

They could not fail to attend because I am man of the book and, in general, of intellectual work. From my young years, I am very fond of Ray Bradbury's novel Fahrenheit 451, later to The Master and Margarita by M. Bulgakov, The Name of the Rose and Foucault's Pendulum by Umberto Eco, Golem G. Maynrik. Recently, I was impressed by the books by Dubravka Ugreshich and Goran Petrovic, which also present these “my” plots. Of course, there are movies, but my bias towards them is not so obvious and perhaps therefore do not occupy an important place in my mind.

Nether helps me nor hinder - at least with regard to my ethnic identity.

I do not fully accept the wording of the question. I consider myself to be fully "integrated" into the environment in which I live and work.

I live exactly where I was born and I would difficult agree to change.

I believe that educated person, who loves his profession and his work and has normal mentality, should not have problems with his identity in Bulgaria. Years ago, many of my compatriots (Bulgarian Jews) changed their names by putting Bulgarian endings of their family names. They did it to secure a smooth professional existence and career growth. They may have grounds to do so, and it is possible to some extent, that this has helped them. Since 1989, the opposite process began - many of whom no one ever suspected that they have any strain of Jewish in them declared themselves as Jews. How suddenly their identity change (by itself) it is not very clear to me. I think these people have a problem with their own identity.

The so-called revival process did not affect the Bulgarian Jews, but I am sure it convinced a majority of them how important it is a person to defend his/her own ethnic identity.